Themes of Ruth, Part 5: A Genealogy of Foreigners

In a recent group Bible study, we have been working through the book of Ruth. As we go, I’ve been using Judges, Ruth: Revised Edition (The NIV Application Commentary) | K. Lawson Younger 📚 for extra personal study. I’d like to share some thoughts and reflections with you as I’ve been traveling through Ruth. If you have not read the book recently, these reflections will make more sense if you spend 10 minutes and read the book first.

The book of Ruth ends in a similar way that the books of Matthew and Luke begin: with a genealogy. We learn that Obed, Ruth and Boaz’s firstborn son, is the paternal grandfather of the famous King David. David, of course, is the king after God’s own heart (1 Samuel 13:14), and the one through whom the Messiah will come (Jeremiah 23:5-6).

This means that the book of Ruth was written long after the events of Ruth. Somebody knew the importance of that genealogy, and the story of Ruth was probably passed down as an oral tradition through the family of David.

The Purpose of the Book of Ruth

But who else is in the genealogy? Boaz’s father is named Salmon, whom we learn from Matthew 1:5 was the husband of Rahab the Canaanite. This means that David, and by extension Jesus, have multiple foreigners in their bloodlines.

This stresses the importance of living in loving faithfulness to God. God is not a “respecter of persons,” he cares about loving faithfulness to himself and to our neighbors much more than he cares about the external marks of being an Israelite. He desires mercy over sacrifice (Hosea 6:6). It is not the food that goes into a man that defiles a man, but what comes out of a man (Matthew 15:17-18), for from the what we have placed into our hearts, the mouth speaks (Luke 6:45).

Ruth was a woman of character who placed her faith in the God of Israel. This was given much more weight than that she was a Moabitess, despite God’s provisions that Moabites should not enter the sanctuary of God (Deuteronomy 23:3).

This may point to the purpose of the book as an argument against those who sought to exclude foreigners in the time of Ezra (Nehemiah 13:1-3, Ezra 6-7).

What God seeks is people who will do his will. The character that Ruth and Boaz display is remarkable, as I have tried to show in these 5 reflections on Ruth. They don’t begrudgingly follow the law of God, they love it. They take the spirit of it and go above and beyond in their service of others. As a result, God rewards them greatly.

Let us do the same. Let us not begrudgingly follow the commandments of God. Let us love God, love his commands, and love our neighbors as ourselves.

The Shroud of Turin | Michael Licona 📽 →

While I don’t know that we have any evidence that something like the Shroud would be created when Jesus resurrected, it’s certainly possible. And while I strongly disagree with Mike Licona on some aspects of Gospel scholarship, I do think he’s a first-rate scholar who does his homework.

In this short video, Mike explains why he’s changed his mind on the Shroud and now believes that the evidence points to it being much older than originally thought, possibly even dating to the time of Jesus. In my mind, the shroud is a piece of relatively weak evidence for the resurrection compared to the historical reports that we call the New Testament, but it’s not nothing. And the tangibility of it is certainly interesting.

Are you enjoying this letter? You can subscribe via e-mail, RSS, and Twitter to be notified when new issues release.

God’s Design for the Growth of the Church | Cheree Hayes 📃 →

I love how the BibleProject blog does exegesis (bringing meaning out of the text). Their focus is on the scriptures and what they mean in the context of the entire scriptures in order to draw application for us today.

In this article, Cheree Hayes breaks down Acts 2:38-47. I’m going to share the article's breakdown of the passage: 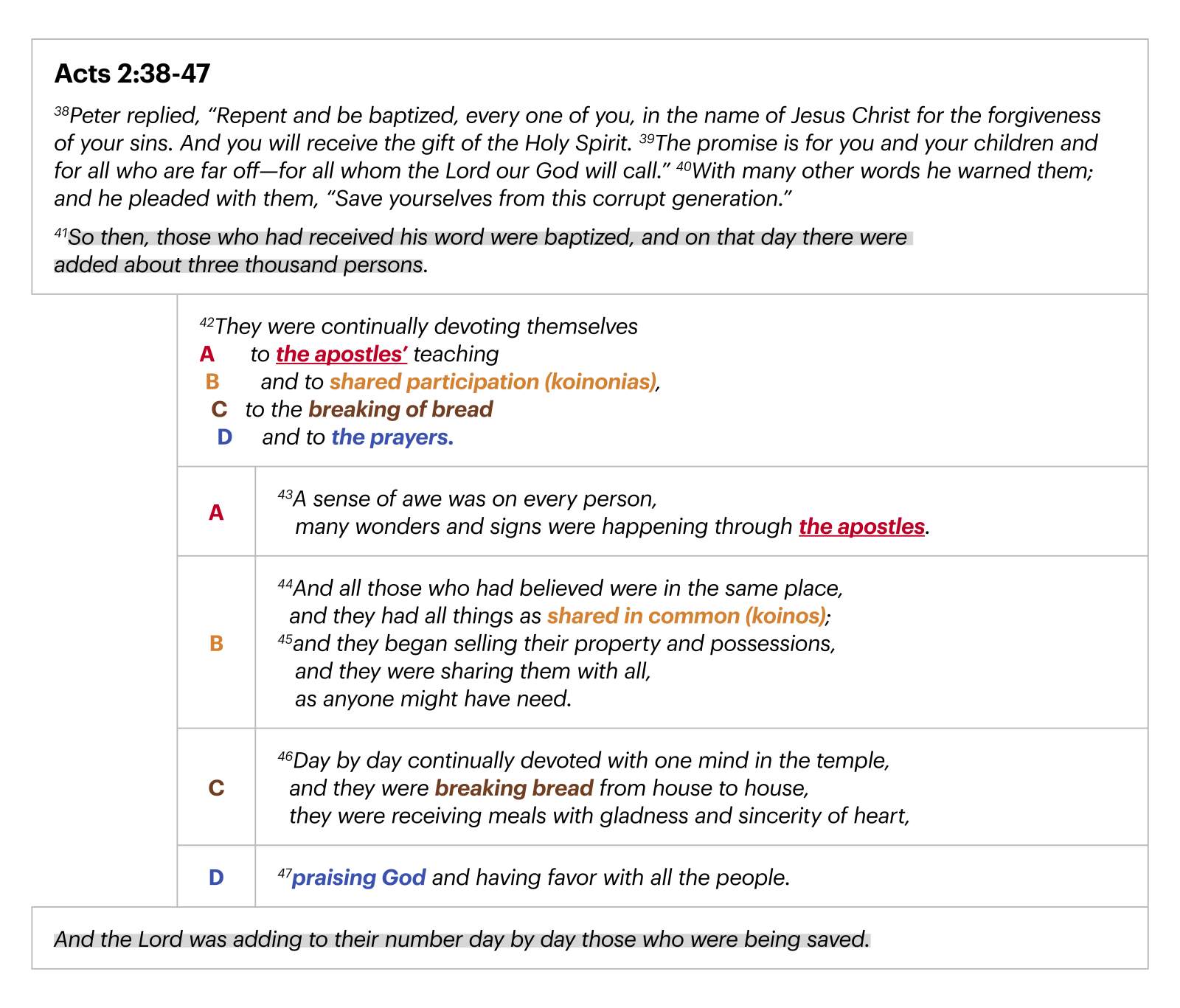 She breaks down four “acts of devotion” that the early Church was “designed” to perform, found in verse 42:

1. Attention to God’s word and works
2. Shared participation and resources
3. Breaking of bread
4. Prayer and worship

The Psalms and the Patristics: With Dr. Carmen Imes 📽 →

The Remnant Radio crew interviews Dr. Imes about her new book: Praying the Psalms with Augustine and Friends 📚. She describes what was surprising, part of which was that she didn’t find Augustine himself to be especially helpful in the Psalms. She explains why, which “friends” she did find helpful, and some surprising things in the Psalms. If you want to read the words our ancient brothers and sisters wrote on the Psalms, Dr. Imes has made an accessible introduction that could be used in a devotional context.

If you've enjoyed reading this letter, please share it with others and help us grow.

Is My Repentance Real If I Keep Committing the Same Sin? | Ask Pastor John with John Piper 🎧 →

I hope that at least some of my readers can identify with me in asking God for forgiveness repeatedly for the same sin I can see in my life. How should we understand our continued sin as Christians?

I think that Piper helpfully re-frames this question by explaining the difference between repentance and confession, and why the language of “repentance” is not helpful in this context.

Next, he brings out two different kinds of confession: superficial confession, and a confession that hates the sin.

Finally, he differentiates between two kinds of sin: pre-mediated and reflexive sin.

Listen in for his full thoughts.

This wonderful song (and album) by Jon Guerra explores the theme of the “Kingdom of God,” especially as it is expressed in the Sermon on the Mount. I find that the best songs, the ones that stick with me the longest, are those that are simultaneously challenging, haunting, and aspirational. This song is certainly all of those.

How have I allowed the American dream to color my vision of “the good life?” Guerra’s beautiful song has challenged me to reframe my expectations by presenting the Beatitudes in a new form.

Why Jesus’s Humanity Matters as Much as His Divinity | Michael J. Kruger 📃 →

Was Jesus like Superman? Both walked and talked like humans but displayed supernatural power. Superman, though, wasn’t really a human, he was from another planet. Should we understand Jesus’ incarnation on earth like that: like a human, but not really a human?

Kruger points us to Hebrews 2:14-16 and other passages to argue that Jesus was truly human. Why does it matter?

The earliest Christians plainly and repeatedly condemned this misunderstanding. Not only do we have the passage from Hebrews, but the apostle John makes Jesus’s humanity a test of orthodoxy: “By this you know the Spirit of God: every spirit that confesses Jesus Christ has come in the flesh is from God” (1 John 4:2).

Many historical and modern groups have denied the deity of Jesus. We know about many of those from Arians to Jehovah’s Witnesses. Fewer know that there are groups that have denied the true humanity of Jesus too, such as the Gnostics.

Kruger then goes on to explain why it is so important that Jesus was truly a human being and the implications for what Jesus experienced on earth.

Best with a Cup of Tea ☕️

If you want to get attention in Evangelical Christian circles, you start an article like this:

We are grateful for many things about our evangelical heritage — we grew up in evangelical churches, learned at some of America’s best known evangelical schools, and now pastor evangelical churches that we dearly love. When we hear leaders objecting that the doctrine of the sufficiency of Scripture has been lost, we pay attention — because we love the Bible, and are convinced that it is indeed central for our lives.

Yet as we listen to the arguments of the anti-woke polemicists, we find their approach thin — lacking dimension.

I don’t agree that all “anti-woke” polemicists are overreacting. In an attempt to correct past failures, some Christians are falling too far to the other side of the line. I’m still trying to find that narrow road, the one where I can be attacked from all sides (apologies for the fatalistic sarcasm).

Leaving that aside, I do find this article by Stevenson and Fenska helpful in focusing our attention on discipleship. In my own observations, I agree with the authors that there is a crisis of thin disciple-making in the Evangelical church.

Discipleship is fundamentally about knowing and following Jesus in all of life. The Christian life is meant to be lived out truthfully and lovingly, with boldness, in our world. This is how faith in Christ works: “We love because he first loved us” (1 John 5:19; cf. Gal. 5:6). The earliest disciples understood that discipleship had an eye toward the needy and was never meant to be restricted to the inner affections or the cognitive realm — as any reader of 1 John or James can see. This understanding of discipleship resonates with the character of our Redeemer, the ethics of Exodus, the proclamations of the prophets, the good news for the poor in the Gospels, the very thing Paul was eager to do (Gal. 2:10), and the hope of the new earth. When the project of discipleship focuses on inner spirituality to the exclusion of our social responsibilities — or vice versa — it becomes “thin.” Thin discipleship focuses on one aspect to the neglect of others. “Thick” discipleship, on the other hand, is discipleship with dimension.

That resonates with my own observations and challenges me to my core. How have I moved my own discipleship to the “cognitive realm” as the authors say (the realm of having a good state-of-mind), and ignored embodied discipleship through good works and justice? I have a lifetime ahead of me to thicken my discipleship. This article was a prod to keep moving on that narrow path and contains helpful practical steps, such as learning to listen well, building bridges, and constructing rather than constantly criticizing.

Keep Your Mind on Things Above

I will be praying for you this week.

Blessed are those who hunger and thirst for righteousness,
for they will be filled.