Keller opens his book by answering two questions: first, who is this book for, and second, why write a book on social justice when so many Evangelical Christians are suspicious of the term?

To answer the first question, Keller answers with three groups: the young who are more interested in their social status than in helping those in need (xv), those who view “social justice” or “doing justice” with suspicion (ibid.), and those younger people who are very interested in “doing justice” but are leaving behind Evangelical Christian doctrine.

To answer the second question, he tells a story of a fellow student at seminary who was African-American, who told him, “You’re a racist, you know.” (xxi) Unlike so many today who would respond with defensiveness or denials, Keller asked questions. The other student told him that white people he’s encountered talked about culture as if that’s everybody else’s problem, while the way white people do things is called the “right way to do things. You don't realize you really have a culture. You are blind to how many of your beliefs and practices are cultural.”(ibid.) As Keller grew in his ministry, he discovered a deep reluctance among fellow white conservatives to social justice. That suspicion and that reluctance has only grown in the year 2022.

Out of the introduction, Keller launches into a biblical definition of justice, Old Testament and New Testament theologies of justice, and practical application. Like any good preacher, and Keller is an excellent one, the book is designed to draw you through the need for justice and follow it up with steps that pastors and laypeople can take. I am going to leave the theological exposition to the book, but I will say that while I was already open to such an exposition, I found it riveting and convincing.

His central claim is that we cannot “do justice” without becoming just, and that happens through the soul-transforming power of Jesus’ work on the cross. Once we see the beauty of Jesus leaving his power and authority to become one of the marginalized and weak (188), we have the power to follow Jesus by weaving ourselves into the community fabric of hurting communities. Keller writes,

If we keep our money, time, and power to ourselves, for ourselves, instead of sending them out into our neighbors’ lives, then we may be literally on top of one another, but we are not interwoven socially, relationally, financially, and emotionally. Reweaving shalom means to sacrificially thread, lace, and press your time, goods, power, and resources into the lives and needs of others. (177)

The strong must disadvantage themselves for the weak, the majority for the minority, or the community frays and the fabric breaks.

And that’s the good news of the Kingdom of God. Jesus did not come to give us power. He came to become one of the weak. He became so weak as to die for those who despised him. If we are to imitate our Messiah, we too must be willing to give everything for the weak and hurting of our communities.

Keller's book is both biblical and practical. It's empathetic with those who want to focus on evangelism because that is "the Gospel," but neither does he accept that position. He slowly draws you through the biblical texts and presents them to awaken the apathetic to justice. Neither does Keller accept the world's justice. Keller is not reactionary, he builds his definition of "social justice" from the text.

Finally, when I picked up the book, I was afraid that this would be a theological text. I shouldn't have worried. Keller is a preacher, and a preacher knows the value of application. Drawing on his decades of inner-city pastoral experience, Keller draws us pictures of what justice could look like in our churches and individual lives.

I strongly commend this book to all Christians. 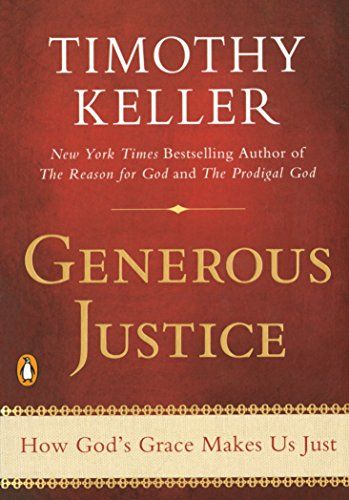